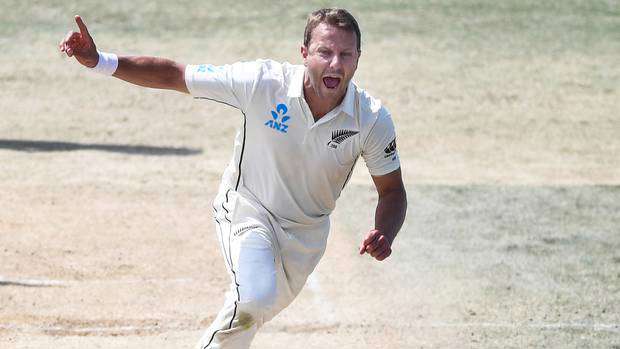 The first nappies have been changed and the sleeping patterns adjusted, and now Neil Wagner is back with the Black Caps.

Not that he was ever far away.

Wagner missed the Black Caps' first-test victory over India due to the birth of his first child – daughter Olivia – but he didn't miss out on the test entirely, watching the match at the hospital and whenever he could get a spare moment among his newly-tasked dad duties.

"I had my phone consistently on Sky Go in the hospital, watching the boys and supporting from afar, and a couple of early mornings [watching on record] while doing the odd nappy change," said Wagner.

"I'm very lucky and very blessed, it's an amazing part of your life. A pretty special week, I've enjoyed the time with family and getting settled in, and now back to business and getting back with the boys."

Wagner was hopeful of playing in the first test in Wellington, but as the wait went on in Tauranga hospital, he ruled himself out of contention, before Olivia was born on Wednesday.

The 33-year-old was delighted to be able to be there to welcome his daughter into the world.

"If she was going to be early then I definitely would have been there with the team, but so be it, she wanted to try and stay a little bit longer and give her dad a little bit of a hard time," Wagner laughed.

"We tried everything we could but she didn't want to budge. Without a doubt on her 21st and her wedding day I'll remind her about it."

Olivia Faith Wagner born 19 February 2020! Lana and Livie were amazing and so proud of them!!!Both doing great and we are truly blessed!!🙏

Wagner, who will come back into the Black Caps XI for the second test at Hagley Oval this Saturday, was also thrilled to be able to support wife Lana, and give back for all the sacrifices she had made throughout his career.

"I'm very happy – amazing to be there and something I'll never regret."