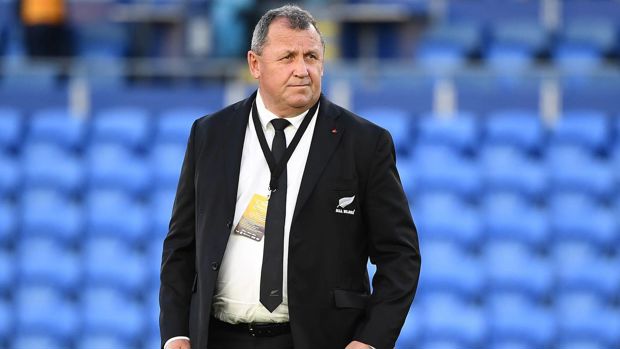 No thanks says All Blacks coach Ian Foster to suggestions the Rugby World Cup could be staged every two years.

World Rugby chief executive Alan Gilpin caused a stir this week when he told the Telegraph the global governing body is considering reducing the four-yearly gap between World Cups to two.

World Rugby has been in damage control since, suggesting Gilpin spoke out of turn and that changing the cycle between the game's pinnacle event is not actually on the agenda.

One week after FIFA announced plans to reshape international football by changing its World Cup tournaments to every two years, Gilpin said: "Biennial World Cups have been considered before and they're definitely something that we will continue to consider.

"It's an interesting concept, especially when you think about the global development of the women's game, too.

"But the men's calendar is very congested and complex, with a lot of different stakeholders, and we have to make sure we engage with them all before we consider a World Cup every two years."

Asked about the apparent proposal, Foster outlined his preference for the status quo.

"I don't know if it's a serious report. We've got a whole lot of proposals out there – we've got to two-yearly World Cups; 12-aside tournaments so there's a few things floating around. A two-yearly World Cup instinctively doesn't sound great to me," Foster said.

"I like the concepts of World Cups being something you build and plan for and I think there's enough significance with the competitions we have in between World Cups to keep the international game vibrant, but we'll see what unfolds."

In his press conference to announce the All Blacks team to face the Pumas in Brisbane on Saturday, Foster also confirmed a quartet of influential figures, including injured captain Sam Cane and Highlanders loose forward Shannon Frizell, will join the team in Washington DC for their five-test northern tour.

Frizell could not gain a visa to enter Australia but this week had criminal charges against him for an alleged assault at a Dunedin nightclub dropped. He was previously offered diversion by police.

Of the players set to bolster the All Blacks for the remainder of the year only Richie Mo'unga will feature in the Rugby Championship. The Crusaders playmaker emerges from two weeks in Queensland quarantine on the Tuesday of the final week of the tournament which puts him in contention for the second test against the Springboks.

Foster confirmed Sam Whitelock, who stayed home for the birth of his third child, injured hooker Dane Coles, Cane and Frizell would rejoin the team for the money-spinning test in Washington DC.

"We don't see any point of going through the process of trying to get two weeks quarantining for them to be over for the two weeks between competitions for us," Foster said.

"The likes of Shannon, Sam Whitelock, Dane Coles, Sam Cane, those people will be looking to join us in Washington. It would've been ideal to bring them over the week before so we could have had a decent week of training before we went to the northern hemisphere, but the current quarantining makes that near on impossible."

Foster made light of Mo'unga, Whitelock and Aaron Smith missing tests due to their new arrivals to confirm the All Blacks are not expecting Smith to play for them again this year.

"I've failed to deal with this issue of timings of babies. We seem to have got our timing wrong on a yearly basis... maybe it was coming out of quarantining in November last year that did the damage.

"We're not planning on Aaron at all. Aaron has made that quite clear. We're on the same page. If things change and there is a window of time to come over we'll deal with that late but it's one of those things that the timing hasn't worked."