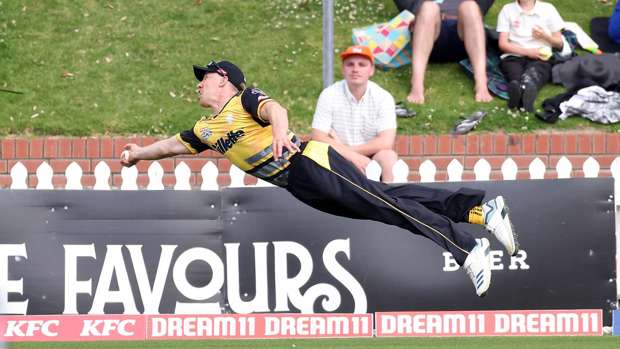 Sprinting into position, Wellington's Logan van Beek threw his body toward the ball and stuck out a hopeful hand. It had been struck cleanly off the bat of the Northern Knights' No 7 Brett Hampton, and the chances of van Beek claiming the catch were slim.

But it was one of those days for the Wellington Firebirds. Van Beek threw his hand out, and it stuck, leaving commentators, fans and the fielder in disbelief.

In your life have you seen a better catch than this?! pic.twitter.com/zW7xHnbV0m

"I just somehow pulled it off. I'm not sure how it happened, but it happened," van Beek said.

"My tactic is, once I see it, I just put my head down and run as fast as I can, then it's just about giving it a chance...you just have to go for it."

Wellington's 80-run Super Smash win saw nearly everything go to plan. Sure, they lost the toss and were sent into bat by the visiting Knights side, but that was about the only area of the game they lost.

Wellington got off to a dream start with the bat as opening batsmen Finn Allen and Devon Conway took to the attack. Allen, playing the dominant role at the crease, made it look relatively easy to maintain a high run-rate – needing just 24 deliveries to bring up his 50.

Allen and Conway brought up their 100-run partnership in the ninth over, and added a further 17 runs before Allen was bowled by Hampton on 79.

The visitors did well to stem the flow of runs after breaking up the opening partnership, with only Allen, Conway (45) and Tom Blundell (22) scoring more than 20 as Wellington were pegged back slightly, to 185-7 from their 20 overs.

While they would have liked to post a higher total after such a strong start, they had their tails up immediately in their defence when Hamish Bennett cleaned up Katene Clarke with a slower ball that tailed into off-stump with just the second ball of the innings.

After five overs, the Knights were reeling at 32-3 - and Tim Seifert was watching partners come and go at the crease.

Seifert was the only Knights batsman to handle what we being thrown at him. He posted 53 runs and had seven different batting partners before eventually falling to Jimmy Neesham.

No other Northern Districts batsman passed 10. Neesham finished the innings with 3-11 from three overs, while Michael Bracewell took 4-28 from his three.

With the win, Wellington remain unbeaten in four games this season and sit at the top of the standings, with a game in hand on the second-place Central Stags.

Earlier, the Wellington Blaze earned revenge on the Northern Spirit, who had snapped their 16-game winning streak on New Year's Day. The Spirit were restricted to a measly 100-8, with the international bowling quartet of Leigh Kasperek (4-16 off four overs), Jess Kerr (2-21 off four), Amelia Kerr (0-16 off four) and Maddy Green (1-10 off three) dominating.

Wellington cruised to victory with five wickets and three overs to spare to move back to the top of the table.