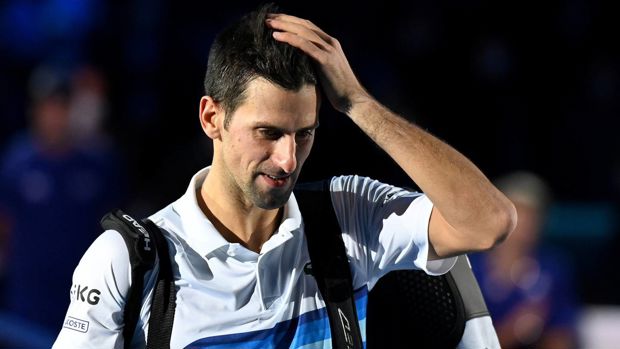 The French journalist who interviewed Novak Djokovic without knowing that the men's top tennis player had tested positive for Covid-19 said he was told not to ask him about his vaccination status for the virus.

Franck Ramella from French publication L'Equipe spoke with Djokovic in Belgrade on December 18, two days after the date Djokovic has stated he tested positive for Covid-19.

Ramella wrote: "The instructions were clear — no questions about vaccination."

The journalist said the topic was clearly "very sensitive".

"So we didn't ask him if he had made efforts to get tested. If we had asked him, what would have been the point?" he added.

Writing in the newspaper on Wednesday, Ramella said the L'Equipe photographer asked Djokovic to remove his mask for five minutes during the interview, but he refused.

The player did later pose without a mask for a photo.

Ramella said he only learned "three weeks later" that Djokovic had tested positive but that he himself had tested negative after the interview.

In an interview with the BBC, Serbian Prime Minister Ana Brnabic said if Djokovic went out knowing he had a positive PCR result, it would be a "clear breach" of Serbia's Covid restrictions.

"If you're positive you have to be in isolation," she said.

The maximum sentence under Serbia's criminal code for failure to act pursuant to health regulations during epidemic is three years imprisonment.

Djokovic admitted on Wednesday he had made an "error of judgment" in going ahead with the interview.

"I felt obliged to go ahead and conduct the L'Equipe interview as I didn't want to let the journalist down but did ensure I socially distanced and wore a mask except when my photograph was being taken," Djokovic said.

"On reflection, this was an error of judgment and I accept that I should have rescheduled this commitment."

Djokovic's failure to divulge his Covid-positive status to L'Equipe was described as "deeply concerning" by the International Tennis Writers Association (ITWA).

"The news that Novak Djokovic did not tell one of our members — and the rest of the L'Equipe team on the day — that he had tested positive for Covid-19 is deeply concerning," an ITWA statement read on Thursday.

"As journalists, we take great care to adhere to all Covid-19 rules in place, and we would expect all players to do the same.

"Furthermore, it should be noted that journalists have to be fully vaccinated to travel to Melbourne for this year's Australian Open."

Djokovic made the admission about L'Equipe in an Instagram post about his movements before he travelled to Australia, where he is hoping to take part in the Australian Open from Monday.

The Serbian star, who has admitted he is not vaccinated, flew into Melbourne a week ago claiming a vaccine exemption because of a positive PCR test result on December 16.

But border officials rejected his exemption saying a recent infection was an insufficient justification for an exemption, cancelled his visa and placed him in a detention hotel.

Although that decision was overturned on a technicality by the Federal Circuit Court on Monday, he is facing possible deportation from Australia if Federal Immigration Minister Alex Hawke chooses to use his personal power to do so.

Djokovic says his agent filled in a form which stated he had not travelled in the 14 days before his arrival in Melbourne, after it emerged he flew from Belgrade to Marbella in Spain during the two weeks before leaving for Melbourne.

On the day of his claimed positive test in Serbia, Djokovic appeared at a ceremony to honour him with stamps bearing his image. The following day he attended a youth tennis event. He appeared at both apparently without a mask.

Djokovic said he only received the PCR test result after attending the children's tennis event.

In another twist, Australian media on Wednesday seized on reporting by Germany's Der Spiegel newspaper that cast doubt over Djokovic's positive test.

The newspaper said it had scanned the QR code on his Serbian PCR test, which it said delivered a negative result, only to change to a positive result an hour later.