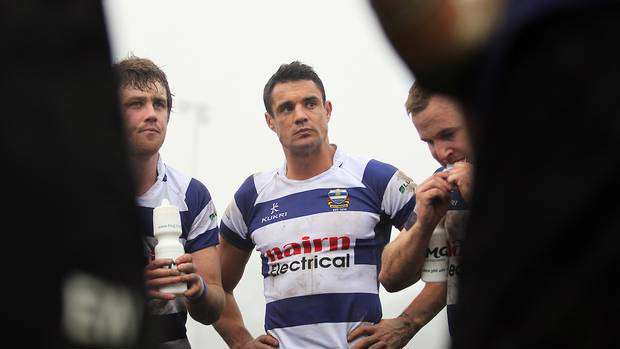 A heartwarming video of Dan Carter getting dropped off at his old rugby club Southbridge by his dad has brought nostalgia back for the grassroots game in New Zealand.

The video, which was posted to Twitter by RugbyPass, shows Carter getting a lift from his dad Neville to his boyhood club Southbridge, where the All Blacks great played his first game of rugby in New Zealand since 2015.

Carter, who ended up playing a full 80 minutes in Southbridge's 54-14 victory over West Melton, surprisingly joined the Blues last month and went back to his grassroots as he attempts to get back to full match fitness ahead of his highly-anticipated Super Rugby Aotearoa debut.

Dan Carter getting a lift from dad to his club rugby game today. pic.twitter.com/yiBQHhJ7d0

Fans took to social media to praise the video as "Kiwi rugby in one clip".

"Must of [sic] been great for his old man being able to take him to the game," said one fan. "Everything about this is brilliant. The love affair with #Rugby is going strong #Grassroots"

"Love everything about this," said another. "Looks like any rugby club in the world, ramshackle car park, heading under the stand to a tiny wee changing room with only half the team there. Some hungover, others taking the piss at the state they're in. Oh how I miss it."

The 38-year-old Carter was happy with his return to rugby but admitted he probably needs a few more weeks to get up to speed before making his Blues debut.

"If anyone saw that game today, I'd say myself that I'm a bit rusty," Carter told reporters after he kicked six conversions and had a hand in two tries in Southbridge's win.

"It's good to make the first step in to potentially playing again. I'm not sure if I could play at Super Rugby level just yet. You leave those kinds of decisions up to the coaches."

The Blues face Carter's old Super Rugby club the Crusaders this weekend, but the Canterbury-native wasn't promising a dream appearance, saying the decision is up to Blues coach Leon MacDonald.

"Whether I play or not, I'm not too worried," Carter said.

"I'll leave that decision to Leon and the selectors up at the Blues."

Carter also featured in a video celebrating with his Southbridge teammates, which he posted on his Facebook account.

Carter, who last played for Southbridge in 2014, played all of his age-group rugby with the Canterbury club, as did his father Neville who remains heavily involved with the club.