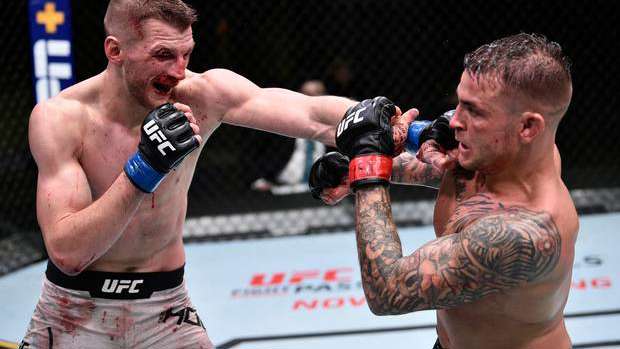 Dan Hooker will live to fight another day.

The Kiwi UFC star was hospitalised after a brutal headline fight against American Dustin Poirier in Las Vegas on Sunday, but was discharged soon afterwards with just some stitches above his right eye.

"I got checked out of the hospital - everything's all good, just a couple of stitches on the eye; but hey that's the game we play," Hooker said.

"No worries, it's just a small setback. I'll be back."

Sunday's fight was the biggest of Hooker's career, looking to move up from his No 5 ranking in the UFC lightweight division at the expense of the No 3-ranked Poirier and work his way into title contention.

While he fell short, with Poirier claiming a unanimous decision win, Hooker proved he belonged with the division's elite.

Hooker started the better of the two fighters, taking the first two rounds on all three of the judges' scorecards. However, after expending plenty of energy trying to finish Poirier at the end of the second round, the Kiwi was out of steam in the later stages, with a massive fifth round from Poirier sealing the deal.

"It was a tough one, man. Dan came to fight. He's a tough guy," Poirier said after the bout.

Poirier admitted in his post-fight interview he was close to being out late in the second round, after Hooker rocked him with a well-placed knee up the middle.

"He hit me square with a knee and I flashed out for a second. When I came to, he was throwing hooks at me. I saw the ref and didn't know how much time was left. We regrouped and came back stronger. That's fighting. A fight isn't a fight until there's something to overcome. We fought tonight."