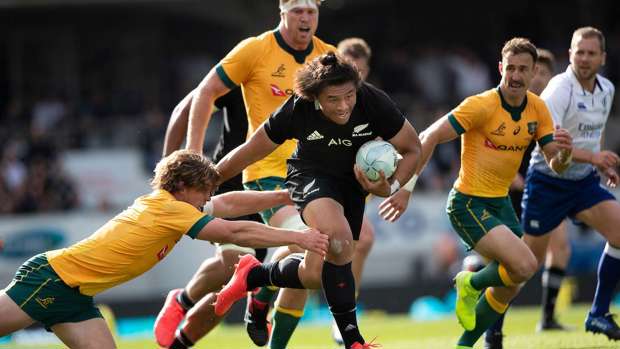 It's the tackle which makes the toughest of rugby players grimace.

Bledisloe Cup star Caleb Clarke revealed that Wallabies captain Michael Hooper grabbed his testicles, as Clarke went on one of his many tackle busting runs at Eden Park.

But far from being overawed, Clarke took the nearest available medical advice and tried to get Hooper back during the second Bledisloe Cup rugby test.

Clarke was being interviewed on Sky TV after the game, where he was shown some of his amazing runs which inspired the 27–7 victory.

"You know Michael Hooper grabbed my nuts just then…it was really sore. I was trying to push his hand off," said Clarke after reviewing the tape.

It was a speech to rival rugby's most famous interview at the same ground, in 1956.

After scoring a great try to beat the Springboks, the rampaging Northland No. 8 Peter Jones caused something close to a broadcasting scandal when he simply told a radio journalist "I'm absolutely buggered." Times have changed.

Clarke broke 12 tackles in eight runs during the test with one of his busting runs setting up a try for Ardie Savea in the second half.

The 21-year-old revealed he wouldn't have to wait long before getting words of wisdom from his All Black father.

Eroni, a 24-test All Black of the 1990s, loves to go over match tapes with him as soon as possible, and the test match would be no different.

Clarke, in his first test start after impressing off the bench last weekend, received a standing ovation when he limped from the field in the 68th minute, star in the ascendent and presumably a fixture in the No 11 jersey for the foreseeable future.

Clarke, described as a "handful" by Wallabies coach Dave Rennie, said he was just as nervous as he was last weekend in Wellington when he came on for the final 11 minutes of the 16-16 draw.

"I was still nervous – that was the funny thing," he said. "I had quite a broken sleep, with feelings of excitement and nervousness."