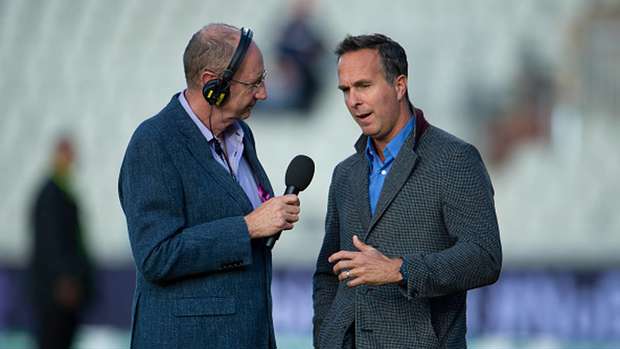 England legend Michael Vaughan has raged over the pitch for the match in Chennai as India seeks to even up the Test series.

An all important contest to decide the Test Championship, England finally bowled India out for 329 early on day two as Rishabh Pant finished 58 not out, backing up Ajinkya Rahane's 67 and Rohit Sharma's 161.

England didn't find it anywhere near as easy, crumbling to 5/52 before being bowled out for 134 in the final session, with England trailing by 195 at the end of the first innings. India was 1/54 at stumps with a 249-run lead.

It's no secret that spin is the strength for India with Ravichandran Ashwin taking 5/43, including a vicious ball to bowl Ben Stokes for 16.

The ball drifted in to leg stump before spinning violently to hit the top of off.

Only Ollie Pope's 22 and Ben Foakes' 42 not out helped England avoid the follow-on as the visitors posted their lowest score against India since 1986 and equalled the fifth lowest total in clashes between the nations.

While former England skipper Michael Vaughan tweeted that he wasn't making excuses for the England team and he wasn't alone in his criticism of the wicket, he took aim at the curators for not making a "five day prepared pitch".

It’s entertaining cricket as things are happening all the time but let’s be honest this Pitch is a shocker .. Not making any excuses as India have been better but this isn’t a Test Match 5 day prepared Pitch ... #INDvENG

Aussie spin king Shane Warne was quick to reply, saying the toss hadn't decided the result with the pitch being consistent throughout.

While Stokes' wicket was a great ball, Virat Kohli was left dumbfounded when he was bowled off a sharp turning ball from Moeen Ali on the first day.

"The toss was more important to win in the 1st test than this one, as it did nothing the 1st 2 days. Then exploded," Warne tweeted. "This one has been a turner from ball one. Eng should've bowled India out for 220. No different between spinning or seaming & Rohit showed how to play on this surface".

Vaughan then doubled down and said the pitch had changed dramatically from late on day one.

"It didn't do anywhere near as much for 2 sessions … Spun but not like what it's doing now … India would have drawn the first Test if they had batted anything like in the 1st innings … This isn't a good Test match pitch," he tweeted.

"India been better in all aspects .. But the pitch hasn't been the same from Ball one !!! It's fine to produce whatever you want at home to gain advantage .. But this pitch for a 5 day Test match is a stinker .. but if I was India I would have done the same".

Vaughan also had some support from Aussie great Mark Waugh.

I’m all for a good contest between bat and ball in test match cricket but this pitch in Chennai is unacceptable at test match level. You can’t have the ball going through the top of the surface on day 1 from the main part of the pitch. Ie not from the footmarks.

Come on maaaaaate ! The last few days of the 1st test, the wicket started exploding & no one said a word about the pitch when India had no chance. At least this test it’s been the same for both teams from ball one. Eng bowled poorly & Rohit, Pant and Jinx showed how to bat. https://t.co/lx31k7BqCl

There’s no diff between the ball seaming/spinning to much. We always want a fair contest between bat/ball. India have batted & bowled better than Eng in this match - simple. Conditions have been the same for both sides from ball one. But this is excessive & in favour of the ball https://t.co/lx31k7BqCl

He chimed in again later, praising the cricket on display, particularly after the Australia-India series went right down to the end of the final session of the last Test.

"Everyone should celebrate the amazing test cricket we are/have witnessed from all countries over the past few months," he tweeted. "It's exciting. The best bowlers/batsman will rise no matter what the pitch conditions or situation of the game."

Much of the cricketing world was enjoying the battle between bat and ball, and the debate the difficult pitch had produced.

There will be a lot of discussion about the pitch. But do keep in mind that a team made 300 at 3.41/over on it.

Disagree about the toss. Had England batted first I doubt they'd have made 250 - this pitch designed to take toss out of it by turning from day one. Basically India back their spinners to outbowl ours... https://t.co/cZBCccxFHL

Strange the way a rank turner is considered a ‘bad’ pitch whereas a green seamer isn’t. Narratives mean nothing. You have a bat. The team hits the ball the best always wins. #IndvEng