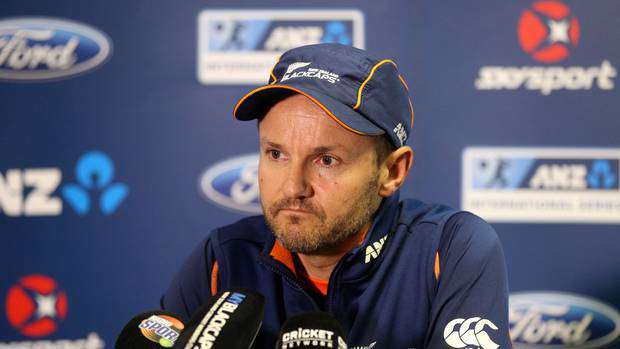 Former Black Caps coach Mike Hesson is on a shortlist of six to be the next coach of the Indian cricket team.

The new head coach is expected to be chosen on Friday with the incumbent, Ravi Shastri, as well as Hesson, Tom Moody, Phil Simmons, Lalchand Rajput and Robin Singh among the contenders. The BCCI's Cricket Advisory Committee, headed by Kapil Dev, will convene in Mumbai to conduct the interviews before making their decision.

Hesson and the two other overseas coaches are likely to join the committee members over video conference, while Rajput and Robin, team manager and fielding coach during India's 2007 World T20 win, are likely to be present in Mumbai for the interviews.

Confirming the updates, a senior BCCI official was quoted by CrickInfo as saying by Press Trust of India, "These six will give presentation for head coach before CAC. It has been learnt that these six have been short-listed for interview with the CAC."

Hesson announced on Twitter last week he had parted ways with his Indian Premier League side Kings XI Punjab after one season at the helm.

Hesson declined to comment on the reasons for his departure from Kings XI, or the many job prospects he now appears to have at international level and in the IPL with his widely respected coaching credentials.

Hesson coached the Black Caps for six years, highlighted by their memorable run to the 2015 Cricket World Cup final in Melbourne, a semifinal finish at the 2016 World Twenty20 in India and a home test series win over England in April 2018 which boosted them to third on the world rankings.

He stepped down in June last year with a year to run on his contract, citing family reasons, as Gary Stead took the coaching reins.