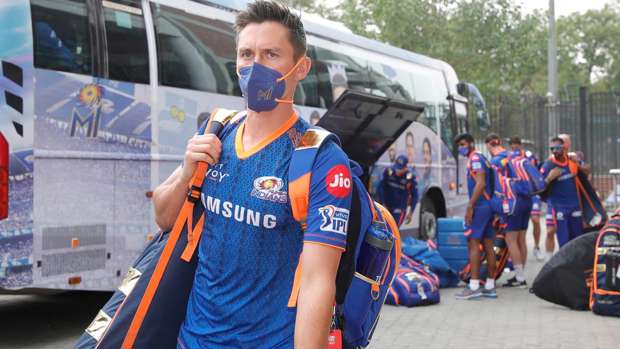 New Zealand Cricket and the Players' Association are working hard to bring Kiwi cricketers in India back home, while members of the test team will fly straight to the United Kingdom ahead of the Black Caps' tour of England next month.

It's uncertain and nervous times for many Kiwis in India, including the 10-player contingent and several more coaches and staff in the Covid-ravaged country for the Indian Premier League, which was suspended indefinitely on Tuesday after a number of players from three teams tested positive for the virus.

"The BCCI [Board of Control for Cricket in India] will do everything in its powers to arrange for the secure and safe passage of all the participants," IPL chairman Brijesh Patel said in a statement.

That, however, is proving to be a challenging task, admits New Zealand Cricket Players' Association boss Heath Mills.

"The players and the coaches are all pretty anxious now," Mills told Newstalk ZB. "And they're pretty keen to come home, probably like most New Zealanders who are in India at the moment and keen to get back to this country.

"The biggest issue is the transfers and the logistics of getting people back to New Zealand. There's clearly a lack of flights leaving India. Some of the teams have been very proactive and are looking to put on chartered flights for some of the players, hopefully in the next two or three days. But others will essentially have to go through commercial flights from either Dubai or Doha or another port."

Meanwhile, nine players and staff will head straight to England ahead of the Black Caps' two-test series against the hosts and the World Test Championship final against India.

Black Caps captain Kane Williamson, Trent Boult, Kyle Jamieson and Mitchell Santner were already set to join the test squad in England later this month, while Lockie Ferguson, Jimmy Neesham and Finn Allen were also set to depart for the UK to play in the Twenty20 Blast before the IPL suspension.

The other Kiwi IPL players - Tim Seifert, Adam Milne and Scott Kuggeleijn - will head back to New Zealand.

The Times in the UK reported that several of England's 11 IPL players – Jos Buttler, Jason Roy and Sam and Tom Curran – had already boarded flights home.

"New Zealand Cricket is working really hard with the ECB [England and Wales Cricket Board] to try and organise a transfer leg for those players to get to that country," Mills said. "That's also not easy with restrictions with the UK government and also logistically how we move people from different cities in India to get on a chartered flight.

"We've got confidence in New Zealand Cricket and the ECB that they'll have player health and wellbeing as the number one priority.

"In terms of the players coming back to New Zealand, they're essentially on their own with their franchises' help and assistance where possible."

Mills said it may take a few days to confirm the logistics around the flights out of the country, meaning the players – many of which will be in lockdown in hotel rooms – will have to "sit tight at the moment".

"It's a challenging time but they're no different to a number of other people. We all see what's going on in India and really feel for the people of that country. It's a terrible tragedy unfolding there.

"Our guys, they understand that they're not more important than anyone else but we do need to try and help them where we can to get home."

As a result of the IPL's suspension, the Black Caps and England should have their full squads available for the first test at Lord's on June 2.

"In theory they may well be available for the test but in all honesty at the moment it's not the focus," said Mills.