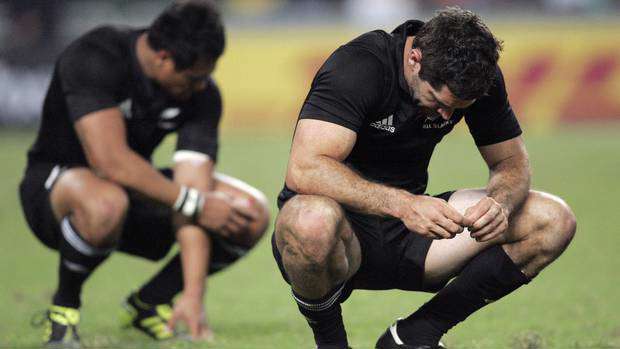 The All Blacks are facing the chance of coming up against two of their fiercest rivals in pool play at the 2023 Rugby World Cup after seedings for the tournament's draw were announced today.

New Zealand, England, South Africa and Wales will head the four pools within the tournament after each team's world ranking position as at Jan 1, 2020, was used to decide each tier of seeds after the chaos caused to the 2020 international calendar because of Covid-19, which means some Test sides, including Japan, are unable to play in 2020.

This means two of the sides that have plagued the All Blacks the most over the past decade have a chance to make the road to a fourth World Cup title a bumpy one.

The Rugby World Cup 2023 pool draw will take place in Paris at Palais Brongniart on 14 December 2020.

The World Rugby rankings as of 1 January 2020 will be used to determine seedings.

Since 2010, the All Blacks have lost 12 tests against World Cup rivals. Australia (5) and Ireland (2) form a majority of those losses.

The inclusion of Ireland in the second band of seedings, despite the side's current ranking of fourth in the world, is the biggest surprise of the announcement, while Australia's relatively poor form in recent years leaves them ranked sixth for the tournament draw's purposes.

Alongside Australia and Ireland in the second band sit yet another bogey side for New Zealand, tournament hosts France. While the French haven't defeated the All Blacks since 2009, two of New Zealand's seven World Cup losses have come against them.

Meanwhile, the decision benefits Wales considerably, given Wayne Pivac's side had dropped to sixth in the World Rankings before lockdown following three defeats in four matches in the Six Nations under the first-year head coach.

Scotland have also been hard done by as a result, having climbed up to eighth place in the latest World Rankings, meaning they would have been allocated in Band 2, only to now end up in Band 3 based on their position in January. Scottish Rugby had no comment on the decision on Friday.

Ireland are in Band 2 alongside Australia, Japan and hosts France, while Scotland must settle for a place in Band 3 with Argentina, Fiji and Italy.

The teams making up Bands 4 and 5 are still to be determined through the Rugby World Cup qualification process, but are likely to include Georgia, the United States, Samoa and Tonga among other sides. Georgia, currently 12th in the world, are another unfortunate side to miss out on being placed in a higher band.

World Rugby Chairman Sir Bill Beaumont said: "The draw is a key milestone on the journey to Rugby World Cup France 2023 and the time when the tournament truly comes to life for teams and players alike, enabling key operational elements to be undertaken such as venue allocation, optimal match schedule development and, of course, the ticketing programme.

"While Covid-19 means that, in the interests of fairness for all qualified teams, we have needed to draw a line under the rankings at the beginning of the year, everyone should appreciate that this is a unique time, we can't delay, and we must continue to accelerate planning for what is going to be a truly spectacular and special Rugby World Cup 2023 in France."

Regarding the timing of the draw three years out from the tournament, World Rugby added: "The Rugby World Cup Board has recommended that the draw for future Rugby World Cups should take place no earlier than one year preceding the event to ensure the pools better reflect performance at the time."