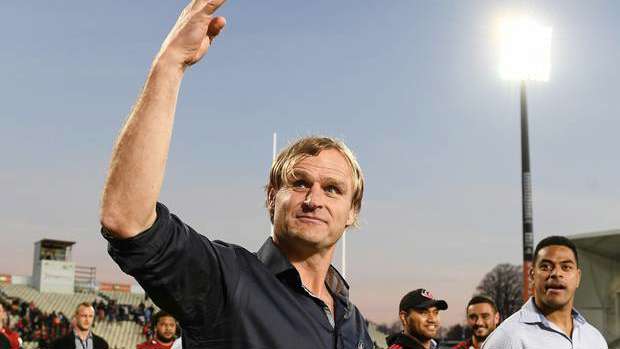 Crusaders coach Scott Robertson has laid out his dream situation for the 2021 Super Rugby season and it involves a step back to the past.

Robertson told Lesley Murdoch on Newstalk ZB's All Sport Breakfast Canterbury that the next edition of Super Rugby would ideally involve Australian teams.

"I think it's really important ... we keep our connection with Australia.

"We've got a lot of history, they're not the strongest at the moment and we know where they need to be but I love the ability to go over and play the 'Tahs on a Sunday afternoon and all the Kiwis come over there and watch, or you're in 30 degrees heat at Suncorp or you're in minus one playing the Brumbies," Robertson said on Saturday morning.

After leading the Crusaders to their fourth Super Rugby title in a row, this latest crown was confined to Aotearoa, a test Robertson appreciated but said was also limited in its capacity to develop players.

"That's a really important part of players' learning, how to not just play New Zealand teams week in, week out. It's a different experience going overseas, it keeps it exciting, you challenge yourself."

However, Robertson also wanted to expand that overseas experience further afield, proposing the idea of a championship that involved the best clubs facing off from around the world.

"I'd love to be able to see the team that has been successful in winning that comp [Super Rugby] go on to play the winner of another comp.

"Ideally, that would be a world rugby comp, I think that's the next level. I'd love, personally, for us to test ourselves against Saracens or Leicester in some way, even if it was once every four years or even if we had to beat a couple of teams on the way through to get to a world final, that's the thing that strikes us and I think it would strike the public as well."

Rugby Australia (RA) has reportedly set New Zealand Rugby a deadline to agree to a Super Rugby competition from 2021, catering to their terms.

RA submitted documents to potential broadcast partners on August 11 that require New Zealand to agree to terms around a competition by September 4. RA wants whatever competition that is established to feature all five of their franchises, differing from what NZR has previously requested.

Following their Aratipu review of their own Super Rugby landscape, NZR want to establish a new competition from next year that includes Australia. However NZR would prefer one featuring their five teams with two to four Australia sides, and a new Pacific Island team.

RA is also reportedly interested in a 'Super 8' competition next year, featuring two club sides from Australia, New Zealand and South Africa, along with one from South America and Japan.