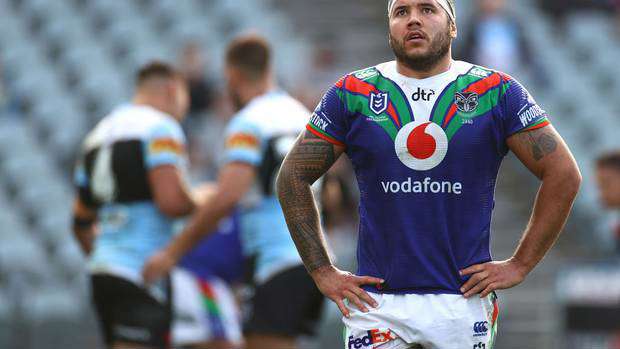 The Warriors' season balances on a knife edge.

In what has been one of the more remarkable NRL storylines in recent years, the uprooted Auckland club remain in the hunt for the top eight with three rounds to play.

But tonight, against the Cronulla Sharks, that could all end.

The Warriors are playing to keep their finals hopes alive.

To do so, they'll need to put far behind them the memory of their last Sharks encounter, a 46-10 trouncing eight weeks ago.

Former Warriors half Shaun Johnson was at his impressive best, scoring a try, assisting on two others and converting seven of eight goal attempts.

And with Johnson returning for the Sharks after a three-week injury absence, Warriors forward Isaiah Papali'i said they couldn't let their former teammate take control again.

The Warriors will get a lift of their own for tonight's game, with winger George Jennings and prop Daniel Alvaro available after the two loan players were forced to stand down for last week's loss against the Parramatta Eels, their parent club.

But while the Sharks welcome back Johnson, they will be without several key players. Former Warriors halfback Chad Townsend and second rower Wade Graham are suspended, while first-choice fullback Matt Moylan is out with a hamstring injury.

Defeat tonight would see the Warriors, four points behind the eighth-placed Sharks, eliminated from playoff contention.

Even if the Warriors win, they'll still need results to go their way the final two weeks, with a tough run home against the sixth-placed Canberra Raiders and 10th-placed Manly Sea Eagles. Manly beat the Bulldogs on Friday night to snap a five-game losing streak and the expected return from injury of fullback Tom Trbojevic will make them a far tougher proposition. The Sharks finish their regular season against the Roosters and Raiders.

Still, having a chance of making the playoffs this late in the season is not a position many expected the Warriors to be in, given all their issues around relocation, personnel changes and injuries.

"Where we are at the moment is a product of everyone being comfortable and understanding what's required; getting their job done and backing themselves," said Warriors interim coach Todd Payten.

"That has been encouraged in the 18 months I've been here but I think it's a combination of the confidence and belief within the group.

"When you're enjoying playing some decent footy, those things can tend to come off."