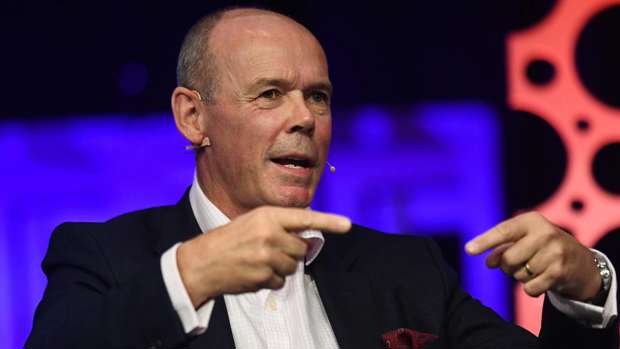 Crusaders coach Scott Robertson has received a glowing endorsement from one of the UK's most prominent rugby figures to replace under fire England rugby coach Eddie Jones.

Sir Clive Woodward, who led England to their lone World Cup win in 2003, praised Robertson and spoke about speculation around Jones' job, with the English RFU carrying out a review into the Australian-born coach's role next month following a disastrous Six Nations campaign.

Speaking to Newstalk ZB's Martin Devlin, Woodward said he would have "no qualms at all" with Robertson getting the job.

"This guy Robertson I don't know, but crikey I just get a really good feeling about him," he said.

"Would I like to play for him? Yes, without even knowing him, just from seeing the way his team plays.

"That would be really interesting on so many fronts."

Robertson – one of the hottest young coaching prospects in world rugby – has had an immense impact on the Crusader since taking over as coach in 2017, leading them to four consecutive Super Rugby titles.

The likelihood of that extending to five is promising, with the Crusaders unbeaten at the top of the Super Rugby Aotearoa ladder at the mid-way point of the competition.

New Zealander Warren Gatland is another high-profile name to be added to the list of potential replacements for Jones.

Gatland is currently making preparations as mentor of the British and Irish Lions for their tour of South Africa this year, which begins on July 3.

That's seen the 57-year-old take time off as Chiefs coach in 2021, for which he is contracted to until the end of 2023. However, another job could be opening up at the helm in England.

According to The Rugby Paper the England Rugby Football Union has "sounded out" Gatland to take over from Jones, who is on the coaching hot seat. The paper is also reporting Gatland is "house hunting" in the Twickenham area.

Former Springboks coach and 2019 World Cup winner Rassie Erasmus has also been thrown into the mix.

Few can rival Gatland's success at the helm of Wales, who he transformed in his time from 2007 until 2019.

He guided the national side to two semifinal berths at the 2011 and 2019 World Cups. Wales also won four Six Nations titles, three of which were Grand Slam wins.

Under Gatland's leadership, the British and Irish Lions won and drew series' against the Wallabies in 2013 and the All Blacks in 2017.

Jones took over after England's disastrous 2015 home Rugby World Cup campaign, and turned them around to achieve a second-placing at the 2019 tournament. His contract runs out at the conclusion of the 2023 World Cup in France.

However Jones' future is in doubt following an embarrassing Six Nations campaign where they suffered losses to Wales, Ireland and Scotland for the first time in 45 years. His coaching methods have also been questioned at times within the England camp over the last six years.