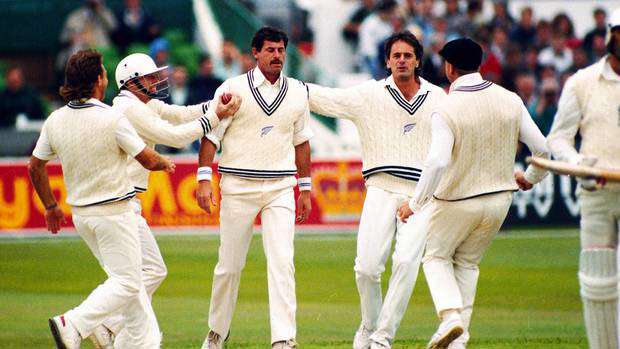 Richard Hadlee was recognised by his peers as the Rolls-Royce of fast bowlers, but it was a sportier model of automobile that provided one of the more infamous moments of his career.

For a while, the relatively humble looking 1986 Alfa Romeo Saloon was the most talked about car in New Zealand courtesy of Hadlee winning one for being named International Cricketer of the Year due to his stunning exploits during the Australian summer of 1985-86.

Well, it wasn't the winning of it that created so much attention as the keeping of it. In doing so, Hadlee contravened one of cricket's unwritten rules and established something of a short-arms-long-pockets reputation he found difficult to shake.

The genius fast bowler talks about the "stigma" that stuck with him for too long on Sky Sport's Ian Smith presentation, The Pod.

"I was voted international cricketer of the year and there was a presentation on the Sydney Cricket Ground and I was presented the keys to the car and [they] were going to ship the car to New Zealand, which I thought was nice," Hadlee recalls.

There was a rule that all cash prizes were to be put into a team fund, in part because while players like Hadlee and John Wright were year-round professionals, most New Zealand cricketers were at best semi-pros. The vehicle complicated matters.

"There was a point of difference. It was an 'object' if you like," Hadlee tells Smith. "It wasn't until we were on the plane home that management said to me, 'Richard, you're going to have to sell the car and put the money into team funds.' I said, 'What if I want to keep the car?' He said [I] would have to put money out of your own pocket into team funds to whatever value the car was. I think it was about $30-35,000, something like that."

In the end, Hadlee kept the car and instead of cash, offered teammates a week's holiday at his Lake Taupo time-share that few took advantage of.

To say it created a rift in the team was not an overstatement. Meetings were held and votes were taken in airport transit lounges. Captain at the time Jeremy Coney dedicated a chapter to it in his book The Playing Mantis and was clearly of the belief Hadlee had contravened the tenets of team unity.

Wright, ever the pro, took a more sympathetic view in his tome Christmas in Rarotonga: "Some of the team thought he was very mercenary over the car business," he wrote. "My attitude… was that he'd already won two cars which had gone into the team pot and put $1800 in each of our pockets, so good luck to him. Besides, he probably didn't have an Alfa Romeo in his garage."

While it seems an almost ludicrous bone of contention looking back (to wit, the car is now owned by Beige Brigade co-founders Paul Ford and Mike Lane and is kept in a secure and secret location in Greater Wellington), at the time the criticism clearly stung.

"I think that stigma of keeping the car stayed around for a long, long time," Hadlee tells The Pod. "I like to think it's all over now but there were some people who were very, very bitter about the decision."

Hadlee also talks about his colorectal cancer diagnosis and his fight to beat the odds.

"I finished my chemo just over a year ago now… and have been recovering since. At the moment I feel very, very good and have done for a good year and a bit. The weight's back on and I have my sense of humour back," he said.

In 2018, the great allrounder was diagnosed after a "routine colonoscopy". Later that year secondary cancer was detected in his liver and he ended up having a third of his bowel and 15 per cent of his liver excised, while his gall bladder and appendix were removed.

"With the diagnosis of stage four colorectal cancer I was given the news that I had a 50 per cent chance of surviving five years," Hadlee said. "Well, I'm two years into that five so the next 12 to 24 months are still quite critical because if anything comes back, the thought of going through the whole process again is not one that I would relish."

Hadlee career was notable for the near obsession with statistical milestones that drove him on and he joked that it was playing a part in his recovery, also.

"Being the stats man that I am… I'd like to beat those odds and be on the right side of 50 per cent," he said.