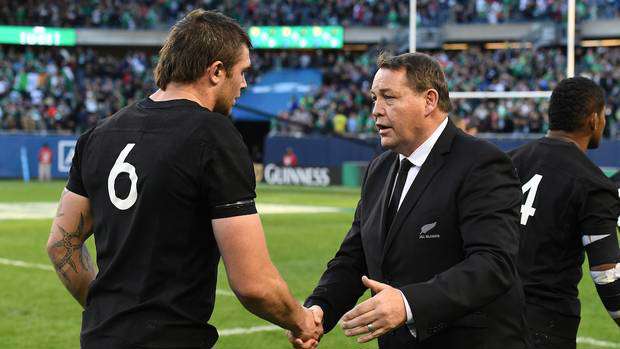 As the build-up to the Rugby World Cup begins in earnest, All Blacks coach Steve Hansen has one particular position in mind where he'd like a star to emerge.

Since Jerome Kaino played his last test, against the British and Irish Lions in 2017, the All Blacks have yet to find a long-term replacement in the number six jersey.

Liam Squire has played 15 tests in that timeframe, but has struggled with injuries, while Vaea Fifita (eight tests) and Shannon Frizell (four) have also been trialled. Jackson Hemopo, Akira Ioane, and Jordan Taufua are all also in the mix, and even the likes of Scott Barrett or Ardie Savea could play there at a pinch if needed.

So, lots of options, but no clearcut choice yet, and Hansen told Martin Devlin on Newstalk ZB that he is hoping that will change before September rolls around.

"We'd like to really establish someone in JK's old role at six. Liam Squire's done a really good job there but he's been injured. We've got Shannon, we've got Vaea, and Akira's starting to play well for the Blues after a good season with Auckland. There's people putting their hand up, but they're probably not as established as we'd like going into a World Cup."

Much like in 2015, when Nehe Milner-Skudder burst into the World Cup squad with a scintillating Super Rugby campaign, Hansen says there is room for a bolter to come out of the blue and make the Japan tournament.

"This year, probably more than previous tournaments, there's room, because we've got some important decisions to make in certain positions, it's going to be about who puts their hands up and does it. In a couple of positions we probably don't have as many [options] as we'd like.

"We're still open to adding more names to [our selection discussions] as we watch Super Rugby. Most New Zealanders could pick 25 or so [of the World Cup squad], but it's getting that last six or seven players right, that's the difficult part and the art of a good selector.

"We've got good flexibility around what we want to select – the type of player we think we're going to need for the tournament, they've got to be good athletes and have great mental fortitude, but they've also got to be able to do their job at a really high level. There's no stone being left unturned."

When looking for that potential Cup bolter, Hansen will be giving extra scrutiny to the closing rounds and playoffs of Super Rugby, to see which players can best deal with the pressure.

"We're looking for people who can show you, particularly in the business end of Super Rugby, that they can cope with the heat of the fire and the pressure that comes with it.

"That's why the latter games of the tournament are so important because that's when the pressure is really on. That will show you how they cope, but it's another level when you get to the All Blacks, you haven't just got your franchise looking at you, you've got the whole nation. For some, it can be overwhelming, and you've got to take the time with them so they can grow and learn to cope with it."