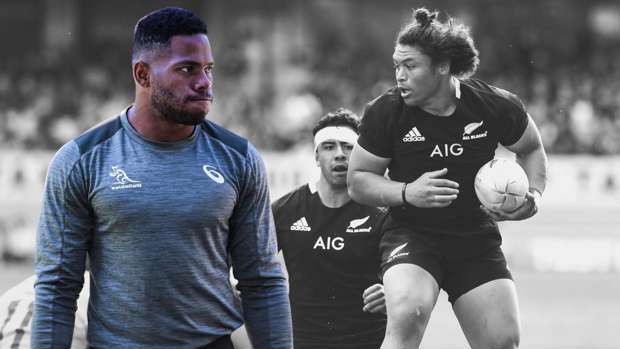 The Wallabies have sent a clear warning to All Blacks rookie sensation Caleb Clarke: we're coming for you.

Clarke was virtually unstoppable in his debut start against the Wallabies in the second Bledisloe Cup test, where he used his pace and power to bulldoze his way through the Aussie defence on multiple occasions.

The 21-year-old's 70 metre run right after half-time which led to an Ardie Savea try even prompted comparisons to late All Blacks legend Jonah Lomu.

It's no wonder he's been top of mind for the Wallabies this week as they prepare for a do-or-die clash in Sydney on Saturday.

For Wallabies winger Filipo Daugunu, who is charged with defending Clarke, it's a challenge he's looking forward to. He says he "can't wait" to get his hands on the young All Black.

"Our aim for this week was to stop him," Daugunu said. "We're looking forward to playing against him again on Saturday."

"Our aim is to kick to him and to contest – for him to catch so we can smash him. Our target for this week was him. Can't wait to hit him."

When asked if there was a "target on his head", Daugunu didn't mince words: "Yes."

"He's obviously a threat with the ball," Philip said. "He did some damage in Auckland. I think it's a team job to stop that. We've defended as a team. It's not just big Filipo here trying to end him. I think it'll be the whole team."

Meanwhile, the Wallabies will be placing their hopes in their own rookie this weekend with 20-year-old playmaker Noah Lolesio set to make his debut at No 10 in place of James O'Connor who was ruled out with a knee injury.

Lolesio is no stranger to the big arena and led the Brumbies to Super Rugby AU glory this year with an ice-cool drop goal in the final. But Saturday's test will be by far the biggest challenge of his career, something head coach Dave Rennie is confident he'll be able to handle.

"He's a young man but as we've seen with the Brumbies, he dealt with the responsibility of playing at that level really well," Rennie said. "He slotted in nicely here. Obviously he was on the bench [in the last test] and didn't get on, so obviously very exciting for him and his family to earn his first cap on Saturday.

"His job is to get out and implement our plan. He's been training with us for five weeks. He's very clear, he's very studious. I know he roomed a bit with James (O'Connor) and he's been quizzing him on a lot of stuff.

"Look he's a smart kid so he'll go into the game really well prepared and we just want him to get out and play and be instinctive because he's done all his homework."

It was one of five changes to Rennie's starting side, including four debutants in Lolesio, Irae Simone, Fraser McReight and Tate McDermott.

"We've certainly got an eye for the future but it's also about winning on Saturday. We've worked really hard and we're going to get a lot better over time. But you've got to get results now too and we're well aware of the quality of the opposition.

"But it's exciting for us. We've got some young men who've been tested and learning lots. There's no reason why if we go out and play at our best on the weekend, we can't get a win."