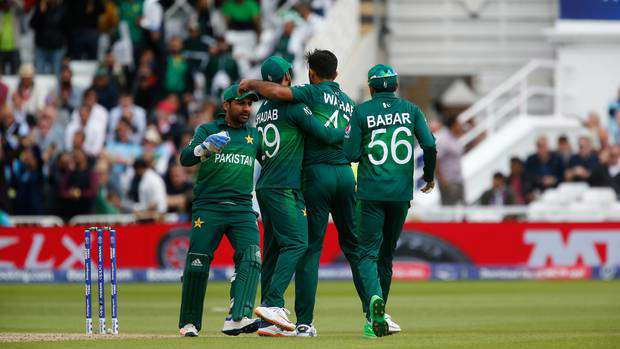 Seven more Pakistan cricketers tested positive for the coronavirus today, raising the total to 10 of the squad to tour England.

Pakistan Cricket Board chief executive Wasim Khan remained confident the tour will go ahead as planned. Pakistan will leave on Sunday, as scheduled, for England, minus the 10 players and one staff member who have to self-isolate at home. None of them are showing symptoms.

An extended squad of 29 players was chosen for the three tests and three Twenty20s, and Khan said it was fortunate that the entire test squad barring Mohammad Rizwan tested negative. After quarantine, Rizwan should be available for the test series due to open the tour in August.

"The tour to England is very much on track and the side will depart as per schedule on 28 June," Khan said on a video call.

Pakistan had four reserve players and Khan said coach Misbah-ul-Haq will get them tested also this week.

As soon as the 10 cricketers and one staff member test negative, they will be flown to England on a commercial airline, Khan said.

The rest will gather in Lahore on Thursday and will undergo a second round of testing on Friday. Those who remain negative will leave for Manchester on a chartered flight on Sunday. Within 24 hours of arriving in England, they will be tested by the England and Wales Cricket Board medical panel.

The Pakistan squad will undergo testing at least five times before the first test in early August.

Giles, speaking before the eight new positives, said the situation was a "concern" but the tour was not currently in doubt.

"We are far enough away from the start of the test series to not worry about that too much at the moment," Giles said on a video call.

"This is the difference with international sport. We need to get our opposition in (the) country. Anything that puts that at risk or in danger is clearly a problem."

The coronavirus is spreading in Pakistan at one of the fastest rates in the world, with new cases in the country leaping from around 2,000-3,000 a day in late May to up to 6,800 a day in mid-June. On Tuesday, Pakistan reported 105 new COVID-19 deaths and the total cases in a country of 220 million has risen to 185,034.

Pakistan has warned that cases of infections could hit a stunning 1.2 million by the end of July if Pakistanis continue to flout even the most basic precautions like mask wearing.

Giles acknowledged there was a risk that the upcoming three-match series against the West Indies, scheduled to take place in July in isolation in Southampton and Manchester, could be the only test cricket played in England this summer.

"All of this has uncertainty still, even to any degree the West Indies series, because we know how fast moving this situation has been around the world," he said.

"We have been very careful at every step. Do we really know what's around the corner? No. The bubble at the Ageas Bowl (in Southampton) and Old Trafford (in Manchester), that's why we are trying to create environments that mitigate as much risk as we possibly can."

Dr. Sohail Saleem, the Pakistan Cricket Board director of medical and sports sciences, said on Monday that touring England was a "big risk" but necessary to help the country get through the crisis.

"There are far more important things going on than sport," he said. "But we are hopeful that if we can get international sport on, it will be a real fillip for many people around the world."

England's 30-man training group was reporting at the Ageas Bowl on Tuesday and being tested for COVID-19 on arrival along with the management team as preparations step up ahead of the West Indies series starting on July 8.

The group will isolate in the hotel at the ground, spending most of the time in their rooms while waiting for the results. England's first day of practice will be on Thursday, with half the group training in the morning and the other half in the afternoon.

The West Indies squad completed its 14-day isolation period on Monday and started a three-day internal warmup match in Manchester on Tuesday.