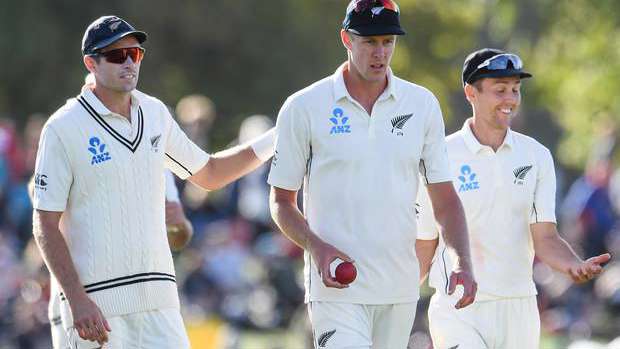 It was a point of contention coming into the test, but captain Kane Williamson has been left delighted at the success of the Black Caps' all-seam attack in their seven-wicket victory over India.

The win sealed a historic 2-0 test series sweep, and it came off the back of a superb bowling performance, in which all five seamers contributed significantly.

The return of Neil Wagner to the side had left Williamson and coach Gary Stead with a dilemma – to play impressive debutant Kyle Jamieson as a fourth seamer, with Colin de Grandhomme operating as the fifth bowling option, or to stick with spinner Ajaz Patel in a more traditional, varied attack.

In the end, the green wicket at Hagley Oval made their decision easier, and the seamers' performance justified it as India were bowled out for 242 and 124.

Trent Boult (6-117) and Tim Southee (5-74) were brilliant as usual, Jamieson was the first-innings star with his maiden five-wicket bag, and Wagner and de Grandhomme both made significant breakthroughs at valuable times.

The absence of Patel hardly impacted the variations on offer from the attack either, with Southee and Boult providing swing (from different areas), Jamieson and Wagner bounce (from different heights and speeds) and de Grandhomme offering seam movement, a touch of swing, and excellent control.

Williamson says the success of the extra-seamer strategy was the "best part" of the match.

"It's sometimes a challenge, because guys' workloads can change – they're used to perhaps bowling one spell and then swinging around from the other end, whereas they all brought in to a slightly different philosophy by playing that extra seamer, and they all complemented each other beautifully throughout this match so we could keep trying to build that pressure by having aggressive options at either end.

"You're always looking for ways to use to the conditions to the best of your ability to try and create pressure and wicket-taking opportunities – in Australia that was very tough to do for our seamers. But throughout this series we did have that movement and we had the discipline from our bowlers to bowl a fuller length and watch the ball move in both directions which was obviously a challenging thing to negotiate."

The success of the seam strategy even extended to the Black Caps' batting. With Jamieson playing ahead of Patel, the tail order was stronger, and Jamieson's 49 in the first innings, and 51-run ninth-wicket stand with Wagner, proved exceptionally important in reducing India's first-innings lead from 89 when he arrived, to just seven when he was the last man dismissed.

Williamson believes the 25-year-old can become a legitimate test all-rounder.

"He's batting beautifully and obviously can truly bat in terms of his technique and how he looks to approach his innings. His runs throughout this series were incredibly valuable because runs were quite tough to come by."

The Black Caps don't play another test until August, in notably contrasting conditions in Bangladesh, where the hosts often play just one seamer, and where the Black Caps will likely only use two or three, including de Grandhomme.

It will be quite the dilemma to decide on which seamers to take on tour - but a problem they'll be more than happy to have.