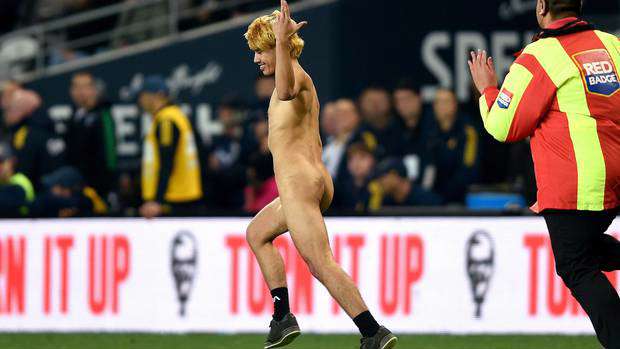 The fan who streaked at Forsyth Barr Stadium over the weekend says it was "the best feeling" despite having to show up in court later this week.

Kenny Flintoff, who was one of three men charged with offensive behaviour after pitch invasions at the Super Rugby Aotearoa opener between the Highlanders and the Chiefs in Dunedin on Saturday night, says the decision to streak across the field started with a dare from his mates.

"It was a bit of an in-the-moment kind of thing where someone called me out and told me 'you wouldn't streak' and that was it for me," he told the Daily Debrief.

Flintoff was unofficially christened the first post-Covid streaker in world sport in what was the first top class rugby match to be played with crowds since the worldwide sporting shutdown.

"Ever since a young kid I've always been streaking here and there. But this was probably my big break – first time to crack the big scenes. It was a good opportunity to get out there with the boys," he joked.

"It was a bit wet on the ground. It was a bit hard on the pitch. A few of the red badgers ran over and I had to give them a fat left plant and put them in my dust you know. I went for the gap first then one came over and I just gave him the inside outside and he was done.

"There was an opening right in the corner which I was aiming for but I did trip right at the end and got jumped on by about three red badgers. It wasn't my best effort."

He says the hardest part was braving the Dunedin winter in the cells overnight with nothing more than a thin set of overalls.

"They gave me these nice blue overalls to wear for the night. It was a bit cold. It was better than the towel they gave me at the stadium but yeah it wasn't the best thing [to wear].

"I came out clean – just a bit cold in the cells for the night."

Even his family has come around and found the lighter side of the incident.

"I got a bit of an earful at first but they came around in the morning. They're fine about it. It's all happy now."

Flintoff says he has a court date on Thursday morning.