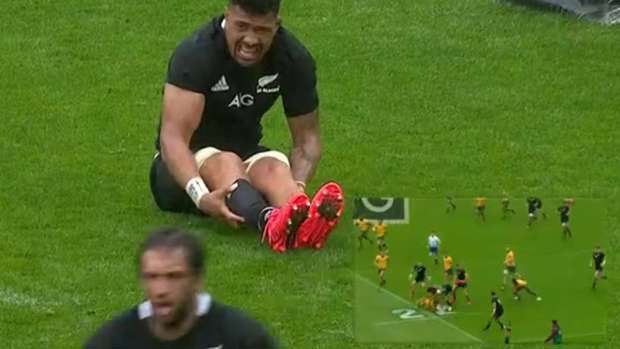 It was the crucial play that saved the All Blacks from a possible defeat to the Wallabies and footage has shown the pain New Zealand number eight Ardie Savea was going through in the closing stages at Sky Stadium.

Sky Sport's player cam was focused on Savea for Sunday's test including the key moment when he turned the ball over with the Wallabies just metres out from the tryline with time up on the clock.

Australia were close to the posts and in prime drop goal territory when Savea pinched the ball which led to an All Blacks counter-attack and almost stealing a late win down the other end of the field.

Shortly after the turnover, Savea struggled with cramp as play continued before teammate Anton Lienert-Brown checked on him.

The test continued for an extra five minutes after the turnover with Savea again on the spot when the Wallabies turned the ball over to begin another All Blacks counter.

Savea led the match in defenders beaten, after slipping through five Wallabies tackles.

🏃🏽📹 PLAYER CAM | Check out @ardiesavea like you've never seen him before through the @skysportnz player cam!

How about this match-saving turnover in overtime.