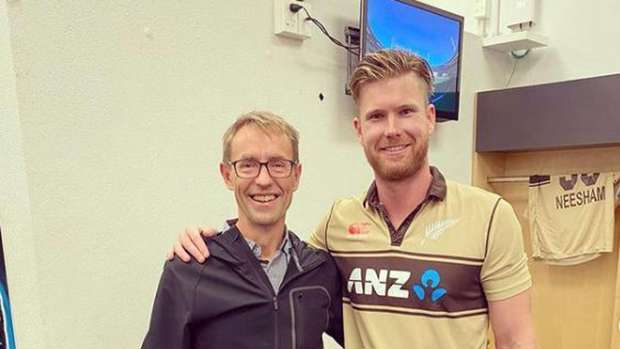 Neesham's tongue-in-cheek caption for the photo was "two of the world's greatest blokes and [Glenn Maxwell]."

Neesham also posted a photo with Australian batsman Glenn Maxwell, with the pair holding up autographed t-shirts from each other.

New Zealand won the first two matches in the T20 series before Australia claimed games three and four to set up a decider at Sky Stadium.

Neesham had a relatively quiet game for an all-rounder, not being required to bowl with New Zealand skipper Kane Williamson favouring a spin attack that including part-timers Glenn Phillips and Mark Chapman.

Neesham also didn't bat with the Black Caps chasing down the target of 143 with 4.3 overs and seven wickets remaining.

"It's been an incredibly hard-fought series with momentum shifts throughout," said Kane Williamson. "Playing three games on this surface and trying to get a read on it was a real challenge."