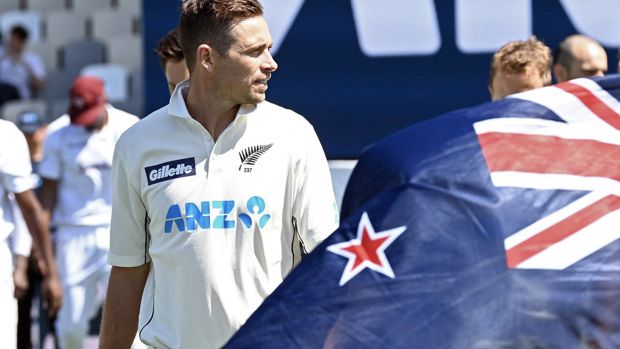 When Tim Southee had Shan Masood caught by Ross Taylor at first slip today, his great mate Neil Wagner ran in from a distance to give him a bear hug.

"Wags was actually one ahead of everyone else. He thought [number 300] was the first one and came in and gave me a big hug. I was like, 'What's going on here mate?' "

A classic case of premature celebration, but Southee and his ecstatic teammates didn't have to wait too much longer before he captured 300 and joined an exclusive club of New Zealand legends.

Haris Sohail was his treasured victim, caught at a short cover by Mitchell Santner for nine, leaving Pakistan reeling at 37-3.

"It is special," he said. "Obviously not many people have been able to do it and the two that have are two of our greatest ever cricketers. It's nice to be in that bracket with those guys.

He sits behind only Sir Richard Hadlee (431) and Daniel Vettori ONZM (362) on New Zealand's all-time list.

"When I was a kid all I wanted to do was play cricket for New Zealand and to sit here after a reasonable time of doing that and achieve a couple of things on the way is a pretty cool feeling."

The kid from Maungakaramea who burst on to the scene in 2008 with a goofy smile, a decent outswinger and a mighty slog to cow corner has matured into one of the finest exponents of swing bowling in the world.

Starting Pakistan's second innings on 298 wickets, he quickly removed Masood for a duck, caught by Ross Taylor at first slip. That followed Trent Boult, Southee's wingman for the bulk of his career, (he'd no doubt call Southee his wingman), taking a wicket with his second ball.

While the hot start and the round number celebration was nice – mum and dad, Murray and Joanne, wife Brya and his two daughters were there to share the moment – Southee recognised the job ahead.

"We know it's going to be a tough grind tomorrow but that's the beauty of test cricket; the beauty of turning up on day five and having the chance to win a test match for your country.

"We're giving Kyle [Jamieson] a bit of stick. It's his first day five in a test match. Test cricket is tough, it's hard and when you turn up on day five with all three results still possible, it's a great feeling."

It could even be tougher with Wagner battling through two broken toes. It might have been Southee's day, but he spared several thoughts for "Wags".

"It sums Neil up as a guy. The way he carries on and gets the job done epitomises him as a bloke. He broke his hand against Australia and carried on as well. He has that I'll-worry-about-it after-the-test mentality.

Southee's feats have at times gone unappreciated outside the Black Caps environment, but some of that could be put down to the misconception that he was an allrounder after he smashed a ridiculous 77 not out on debut against England, including nine sixes. He has never risen to those heights again with the bat.

There should be no such questions about his bowling.

Southee's stock in trade is a late outswinger, especially with the new ball, though he is also noted for his ability to bowl long spells with the old one too.

Former captain Brendon McCullum once stunned New Zealand Cricket bureaucrats by suggesting Southee could be his vice-captain as at that stage he had a reputation as a party boy. When McCullum eventually took over the captaincy he leant heavily on Southee's leadership, as Kane Williamson does now.

There's another string to Southee's bow that should never be forgotten: he is among the very best fielding bowlers. Gifted athletically, he also has superb hands in close catching positions, a rarity for quicks.

(Because this is a celebration story, we will only make cursory mention of the fact he is a lousy reviewer of LBWs off his own bowling.)

Southee has indicated he intends to play, injury and form permitting, for many years yet. He says the one thing he has maintained from day one is a "drive and determination" to keep learning and get better.

It would be sacrilege to some to compare him to Hadlee, but don't rule out him making a dip for 431.

"I'd love to play for as long as I possibly can. I love doing what we do… it's truly an honour to be able to play for New Zealand," he said.

"There are high standards that come with representing New Zealand and as long as you can hold those standards then I guess age is only a number. I've only just turned 32, people probably think I'm a little bit older than what I am.

"You look at the likes of James Anderson still being able to achieve what he's achieving at the age of 38. Ross Taylor (36 )as well, he seems to be getting better and better with age. I long as I maintain those standards I'd like to continue to play."

He is getting better with age, too. His last 100 wickets have come in 20 tests, which is world class.

Southee's 300 wickets have come at an average of 28.53 in 76 tests. Only 23 quick bowlers in the history of the game have taken more test wickets. He starts the climb up that list on day five of this test.