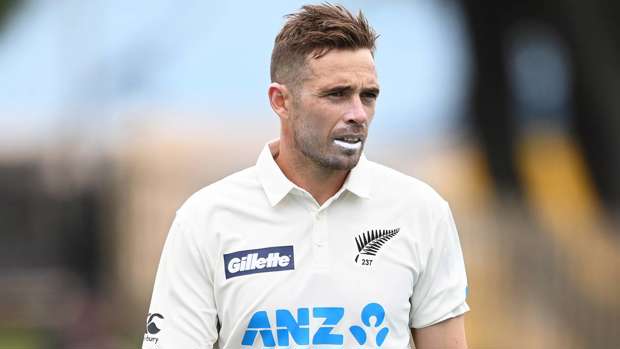 Tim Southee is gearing up for the Black Caps' toughest challenge of the summer so far in the Boxing Day test against Pakistan, following New Zealand's first loss since March in the third Twenty20 on Tuesday.

After a dominant test series against the West Indies, the Black Caps pace bowler believes his side are in for a sterner test this week when they take on Pakistan.

"I think the Pakistan side is a quality side," he said about the upcoming test series. "They have an exciting bowling attack, they offer different challenges to what the West Indies did.

"They're obviously missing a couple of experienced guys through thumb injuries in that first test, but I'm sure it presents an opportunity for another couple of guys to step up.

Southee was the brightest spark in New Zealand's bowling attack in the four-wicket loss to Pakistan in the third and final T20, claiming two scalps for 25 runs.

But a lack of early wickets ended up costing the Black Caps as Mohammad Rizwan starred with a superb 89 to help Pakistan avoid being swept in the series.

"We thought we had enough," Southee said after the match. "It was a tough surface at times, just talking to the batsmen, so I think the way Devon [Conway] played at the end there gave us a real sniff.

"A bit of dew came in which probably sort of made the ball skid on a little better but I think Pakistan played exceptionally well, especially Rizwan."

Southee admitted that he and the rest of the bowling group weren't at their best.

"But we probably needed to take more wickets up front. We've seen in the series so far, if you do take those wickets, it makes it harder for them to get that back end, that death phase."

However, there will be little time to linger on the loss with the Black Caps quickly moving on to the test format in what is a busy summer period.

"It's been the story of the summer – it's chopping and changing reasonably quickly. No time to dwell. It's change of format, fresh personnel come in and join back up for test cricket for a big push to finish the year and start the next year in a good manner as well."