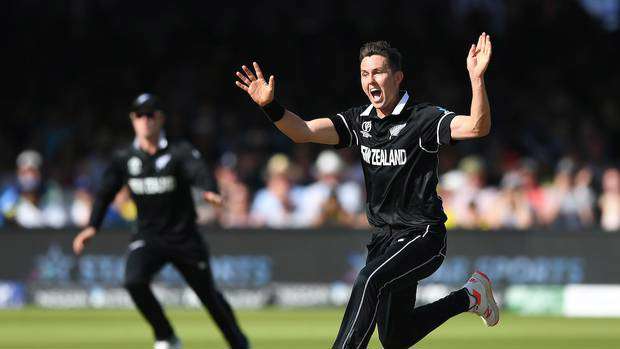 Boult removed Usman Khawaja, Mitchell Starc and Jason Behrendorff with a scintillating final over at Lord's, becoming the first New Zealander to achieve the feat on the world's biggest stage.

The left-arm seamer had removed Aaron Finch early, but had been well handled by the Australian batsmen upon his return, until the final over.

There, Khawaja's impressive resistance was ended on 88 by a yorker that took out his leg stump, before Starc received an even better ball, with a perfect yorker uprooting middle stump.

Out came Behrendorff to face the hat-trick delivery, and, sure enough, another yorker came flying in, rapping him on the pad. Up went the finger from umpire Richard Illingworth, and while Behrendorff reviewed the decision, the ball was shown to be cannoning into middle stump - confirming Boult's place in history.

When you see your nation's first World Cup hat-trick 💪

He nearly made it a remarkable four wickets in four balls, as with the final ball of the innings, Nathan Lyon stepped outside off-stump to try and flick Boult into the legside. He missed, and so - barely - did Boult, with the ball whizzing past off-stump.

Boult is just the tenth bowler to claim a World Cup hat-trick, and the second this World Cup, after Mohammed Shami accomplished a remarkably similar last-over feat against Afghanistan seven days ago.

It's Boult second ODI hat-trick, having claimed one against Pakistan in November. That was the Black Caps' first ODI hat-trick in nearly 12 years, with Boult having joined Shane Bond and Danny Morrison in an exclusive club.

Now, Boult stands alone - the only Kiwi with two ODI hat-tricks, and the only one to have done it on the biggest stage.