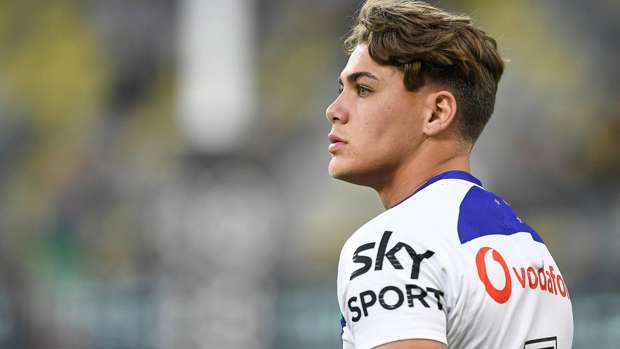 Powerful prop Addin Fonua-Blake could make his return for the Warriors on Sunday, after being named on the extended bench for the clash with the Melbourne Storm (4pm NZT)

The marquee recruit hasn't been sighted since injuring his knee early in the round four clash with the Roosters.

He had averaged 173 metres a game in his first three outings and has been sorely missed over the last 10 weeks.

His return is not guaranteed – as the Warriors will want to make sure he is ready – but coach Nathan Brown indicated a few weeks ago that the Storm match was being targeted for Fonua-Blake's comeback.

In the absence of teenager Reece Walsh (suspended) Roger Tuivasa-Sheck returns to his regular fullback spot and will become just the second player to achieve 100 games as captain for the Warriors, after Simon Mannering.

Regular centre Adam Pompey is also suspended, paving the way for three-game rookie Rocco Berry to return. He was ruled out of the Wests Tigers encounter after a head knock and then was unused as 18th man against North Queensland.

The 20-year-old Berry was outstanding for feeder club Redcliffe in their 34-24 victory over the Falcons in the Intrust Super Cup on Saturday, scoring the first two tries of the game and laying on two others for Edward Kosi.

Brown has named a much-changed pack with Leeson Ah Mau coming off the bench into the starting front row in a swap with Kane Evans.

Tohu Harris and Bayley Sironen are listed in the second row, Harris moving from his #13 role and Sironen back from injury.

Josh Curran is named to start at loose forward in his sixth appearance of the season.

Jack Murchie moves back to the interchange alongside Evans, Bunty Afoa and Ben Murdoch-Masila.