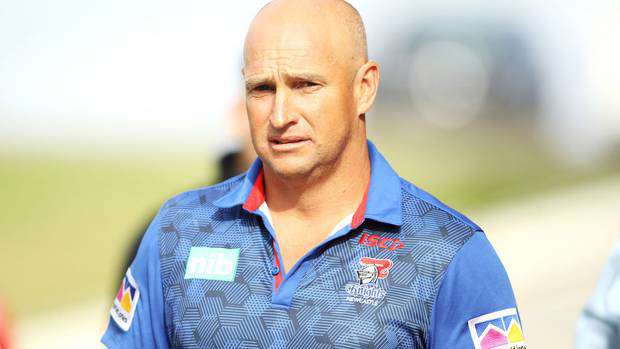 The New Zealand Warriors appear to have found the man to guide them into a new era.

After being knocked back by interim head coach Todd Payten earlier in the week, the Auckland club is set to hand the reins to veteran coach Nathan Brown, who would take over at the end of the 2020 NRL campaign.

Speaking on Australian radio, Brown confirmed he was well down the track in discussions with the Warriors and had ceased all talks with any other teams in search of a new head coach, with a deal potentially being confirmed by the end of the weekend.

"I'm a career coach, I love coaching. The Warriors job is a great opportunity as is the Cowboys job," Brown said on Triple M.

"I'm always in dialogue with the Warriors because I work there as a consultant.

"The recruitment officer Peter O'Sullivan is a good friend of mine and we speak quite often."

The 47-year-old has coached the St George Illawarra Dragons, Newcastle Knights and Super League clubs St Helens and Huddersfield, and was one of the first names mentioned as an option for the fulltime Warriors gig after the sacking of Stephen Kearney.

Brown joined the Warriors earlier in the year in a consulting role before being cut in the Covid-19 crisis, and initially withdrew himself from consideration for the role, before emerging as the favourite after Payten chose to turn it down.

Brown explained his change of heart.

"About six weeks ago I said 'at this stage it wasn't the right opportunity for me'. The timing wasn't right with some certain things going on in my life," he said.

"I've had a lot of dealing with people at the Warriors.

"My time over there was good in the pre-season, but when Covid-19 came I was one of the first people to go like a lot of other people."

The 47-year-old has coached in 438 games across the NRL and Super League in almost two decades of coaching, with a 50 per cent winning record.

Brown was in the spotlight immediately when his coaching career began as at 29 he became the youngest non-playing coach in NRL history when he took over at the Dragons.

In his time with the Dragons, Brown found plenty of success as he led the side to the playoffs in four of his six seasons in charge. Following his stint with the Dragons, Brown went to Huddersfield in the Super League, where he coached for four seasons, before moving to St Helens for another three. His teams made the playoffs in the Super League all seven seasons.

He returned to the NRL in 2016 at the helm of the Knights. He spent three years with the club, finishing bottom of the ladder twice and 11th once. During the 2019 season it was revealed he would not be the team's coach in 2020, and although he was expected to see out the 2019 season with the club, Brown left his post during the campaign.