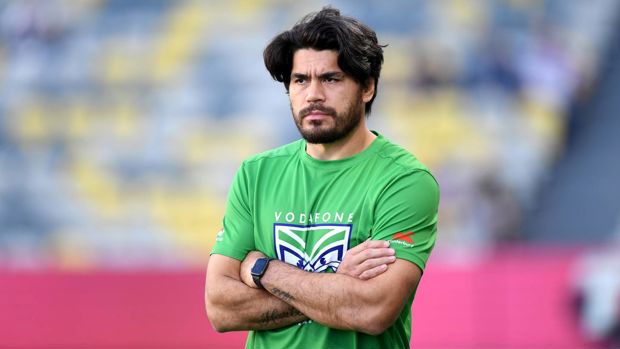 For Warriors vice-captain Tohu Harris, the final straw was witnessing some emotional scenes on Father's Day.

Harris has recently been at the forefront of a campaign urging the Government and Sport New Zealand to assist the club's staff who are marooned in Australia.

He admits it has been difficult to witness their plight, many of whom haven't seen their families since last year but currently have no way of getting home, with no MIQ spots available.

The Warriors personnel have been victims of a quirk in the system, as they were unable to book MIQ spots earlier in the year because the transtasman bubble was open, then found there were none available when the borders closed in July.

That situation drove Harris to launch a social media campaign over the weekend, enlisting other prominent players to spread the message, asking for help from Prime Minister Jacinda Ardern, Covid-19 Response Minister Chris Hipkins and Minister for Sport Grant Robertson.

"[The club] has done everything in the proper way, signed up everyone to MIQ, been checking every day for spots and different things, emailed different people," Harris told the Herald. "We are trying to do things the right way and there is just no spots available.

"There is nothing there and with the next [NRL] season locked in over here we just don't want them to be forgotten and miss out on any opportunities, whether that is through Sport New Zealand's allocation or the normal government allocations.

"We are not asking to skip the queue or get special treatment, but we want the staff to have an opportunity to go home."

Harris felt compelled to act after witnessing some emotional scenes on Father's Day, which drove home the reality of the situation.

"It was very hard to see," said Harris. "I felt so much for them, because they have been without their families for so long, to not be able to be with their children.

"That hit me really hard because I wake up and my son is there. It's tough seeing it in front of us. That was one of the driving factors to get the story out there.

"I experienced a couple of months away from my family last year, [but] the length of time they have had to do it … and twice. I wouldn't be able to cope, myself."

The playing group felt obliged to act, after the sacrifices of the football and operations staff.

"They have worked hard for us every single day for the last two years and they have done it without their families," said Harris.

As well as advocating, the Kiwi players at the Warriors have given up their own MIQ aspirations, to hopefully improve the chances of the nine staff.

"The players didn't want to take up any possible spots that could be available and could go to our staff," said Harris. "We wanted to keep the group as small as possible. The staff are more important than us to get home."

Harris appreciates it is a complex situation and isn't asking for preferential treatment.

"We understand how hard it is for them to manage big sport groups and [the Government] have an obligation to look after the New Zealand people and every citizen that is trying to get back," said Harris. "We are conscious there are so many people in difficult situations.

"But if there is an opportunity for our staff to go home and see their families after two years, we hope they could have that opportunity."

Most of the nine Warriors staff, who are all fully vaccinated, have multiple children.

Many haven't been home since January 3, and they also spent most of last year estranged from their families.

Some have already decided to leave their positions at the club – knowing the strain will be too great for a third year – while those who are returning for 2022 are desperate for some family time before pre-season.

For his part Harris won't be trying to visit relatives in New Zealand in the next few months, instead focused on finding accommodation in Brisbane ahead of the 2022 season.

After the torment of an ACL rupture in round 18 – only the second serious injury of his career – the 29-year-old had a recent boost, honoured as the 2021 Warriors player of the year last week.

"I was a bit surprised but very grateful and humbled to be awarded that again," said Harris. "Especially having it presented by Kevin Campion and also who the medal is named after (Simon Mannering) and what he meant to the club."