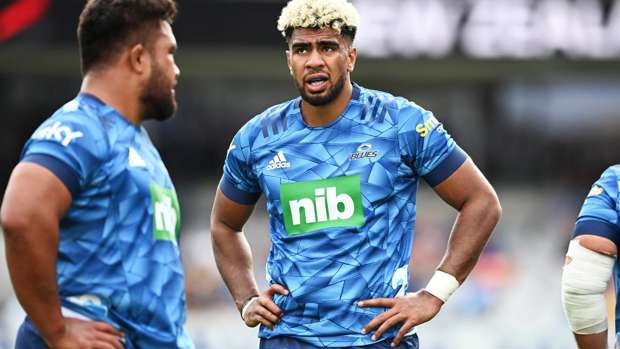 Blues coach Leon MacDonald said he would be having an "honest conversation" with star loose forward Hoskins Sotutu, after the Blues No 8 was shown a yellow card in their 35-29 loss to the Highlanders.

Sotutu was sent to the sin bin 23 minutes into the contest for kicking the ball out of the Highlanders' ruck near his own tryline. Sotutu was at the bottom of the ruck and stuck his foot out as Highlanders lock Bryn Evans went to pick the ball up, forcing a knock-on.

The play was originally ruled as such, though replays showed the action looked to be a cynical one and a foul play check from video referee Ben O'Keeffe confirmed Sotutu's involvement in the knock-on.

Speaking about the play after the match, MacDonald said he needed to check with the All Blacks loose forward to confirm whether it was a deliberate act.

"I have to have an honest conversation with Hoskins to see if it was deliberate, because if it was it needs to stop," MacDonald said.

"If he didn't know what was going on when he did it, then that's one of those ones we've just got to suck up. But only he'll know and we'll find out in time.

"If it was intentional, that's just a silly play."

Sotutu wasn't the only Blues player to be shown a card during the game, with prop Alex Hodgman sent off with seven minutes remaining for an ugly high shot on Highlanders loose forward James Lentjes.

"He wanted to be physical and didn't execute that well. It didn't look that good," MacDonald admitted.

The red card came just after the Blues had scored through prop Nepo Laulala to close the gap to six points, and was quickly followed by a try to Highlanders back Michael Collins.

While Sotutu answered back in the dying stages of the game, the Collins try had given the Highlanders an insurmountable lead.

"We were making linebreaks and not getting enough supporters around the ball. We talk about that and practise that a lot, so I'm not sure why it was," MacDonald said.

"Things that we've spoken about in the past and corrected, for those to creep back in is a bit frustrating. I know the players are frustrated in themselves. I suppose in this competition, you scrap at every little point of the game; every breakdown is a scrap and every time you're carrying the ball there's heat on you. You have to be perfect in your decision-making and execution and the Highlanders, they thrive on high pressure at every point and they did that well."

The Blues will now need to win their final round robin games against the Crusaders in Christchurch and at home to the Chiefs to ensure their place in the Super Rugby Aotearoa final. While the Highlanders join the Blues on three wins, they have also played one more game than the Auckland club and have another loss on their record.

"This is a tough comp. Anybody can beat anybody and we still believe we have enough to be there in the end," MacDonald said.

"We talked this week about having to win two out of three games, so we have to go down the Christchurch and beat [the Crusaders] now.

"They've shown the last few weeks they're vulnerable and we've shown that if we can get our A-game we can mix it - but we've got to be better."