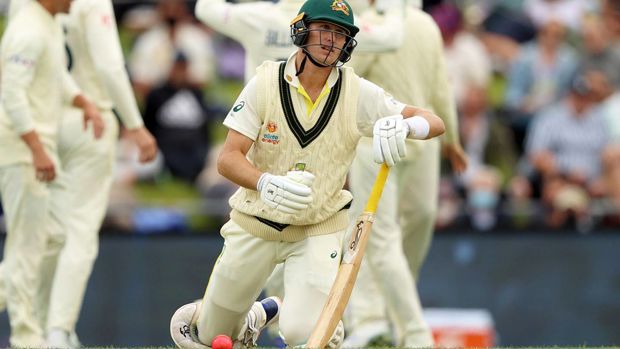 Final Ashes Tests, especially when the series has long been lost, have a tendency to produce the unusual. And this one did not disappoint.

Marnus Labuschagne might be the world's top ranked Test batsman, but he still discovered the sport's ability to make a fool of even its most accomplished performers in Hobart when - having made 44 largely fluent runs - he prepared to face up to Stuart Broad.

Labuschagne's trigger brought his front foot across his stumps, looking for the overpitched delivery to tuck around his legs, but he overbalanced - spectacularly.

Down he toppled, with his middle stump following soon after. As Broad launched into his trademark spread-eagled celebration, wheeling away from the pitch, Labuschagne lay similarly sprawled but across the turf before dragging himself from the ground.

Siri show me the most humiliating dismissal in Test cricket history… pic.twitter.com/jVXgpvTiKe

Perhaps because of Australia's supremacy in the series, even the locals were seeing the funny side. "A horrible dismissal!" roared the TV commentator. "Like Bambi on Ice!" added Brad Haddin.

Still, it's alright when you're winning; comic timing is a luxury perhaps an Englishman would not have taken so kindly to. In fact, so comfortable are Australia with their lot that, as the cameras panned to their dressing room, Labuschagne's captain Pat Cummins, and his deputy, Steve Smith, couldn't hide a broad grin as replay after replay popped up on screen.

Even the man himself, at the end of play, cracked a joke at his own expense on Twitter.

For Stuart Broad, minus his trusted new ball partner in James Anderson, it was an important opportunity to reaffirm his place at the top of the pecking order. Broad, mid-thirties though he may be, is four years Anderson's junior. Write your swansongs for Anderson's last ball Down Under, if you must, but Broad's fire is still burning.

At the very least he will want to depart this Test team with a bang, having retained his place under England's summer sun. A decent display here, in windswept, damp and dark Hobart, in as English surrounds as you'll hope to see, could make that happen.

Labuschagne's undoing was a reminder then that Broad still has a stinging spell or two in him. One wicket for six runs in five overs followed up one for nine in four, and a little glint of Broad's glorious spell at Trent Bridge six years ago caught the eye.

England were truly brought back down to earth come the second session and beyond, Australia closing the day on 241 for six. However, Broad's overall contribution, of 2-48 and offering England's most disciplined economy coupled with a burst of brilliance here or there, is a reminder of what the veteran seamer still offers the country he's served for so long.