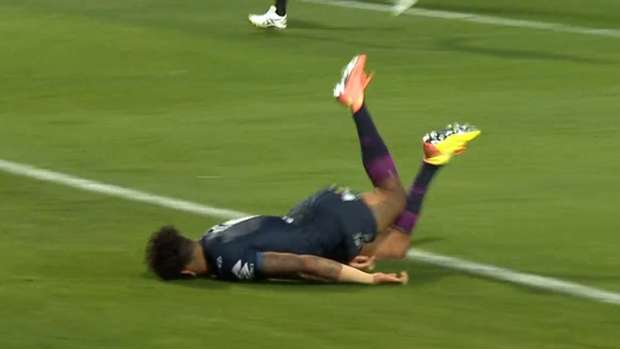 Manaia Stewart with the Top 5 best, worst & weirdest moments from the NRL in the weekend to help you take your mind off the Warriors...

One of the reasons I like watching League hungover is because it’s good to see someone having a worse time than you. On Friday night that person was Christian Welch. This highlight shows the moment Blair sent Welch’s soul to the shadow-realm. What it doesn’t show was Adam Blair checking to see if Welch was still alive before playing the ball. All class.

It's certainly been going the Warriors' way so far!

Peta Hiku might be one of the form centres of the competition. After bagging a hat-trick against the Cowboys he’s only turned around a couple weeks later and produced this shot on a low-flying Fox, that almost certainly saved a try. Oh and that’s the NRL’s fastest man he’s done that to as well.

There weren’t too many Warriors tries to celebrate, but look if we’re gonna concede a few tries you almost don’t mind it when they humiliate themselves like this. The camera-man was taken off the field for an HIA and is questionable for next week’s clash.

Momirovski gets his second for the night...and takes out the cameraman 😂 Hope your leg is okay @SkipperAust ‼️

Between homesickness, losing their coach and having to live in Australia, not much is going our way. Last week it even seemed like the fake crowd was booing us. But through all that it was good to have legends of the game like Smith & Bellamy, as well as former Warrior Ryan Hoffman, come in to let the boys know that what they’re doing is appreciated. Will it turn the season around? Probably not, but we’ll take what we can get atm.

Full marks to @storm captain Cameron Smith, coach Craig Bellamy, and assistant Ryan Hoffman for consoling and thanking the @NZWarriors last night. What our great game is all about. pic.twitter.com/dj4f9AGa3i

Similar to #3 The Foxx has been bumped up the endangered species list after this post try faceplant from Josh Addo-Carr...

Josh Addo-Carr is no stranger to highlight reel tries.

It’s not the first time we’ve seen this move from an Aussie sportsman though...

I know the #1 play of the week shouldn’t be the opponent scoring but seriously have a go at this...

If you didn’t laugh you’d cry.