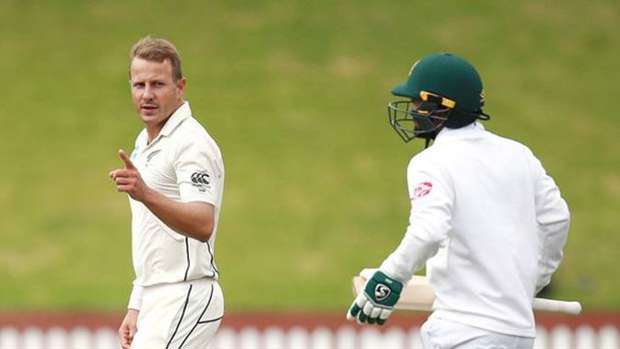 A test victory may be the hardest win to come by in cricket, but for the Black Caps right now, it's as easy as one, two, three.

The Black Caps needed just three days to wrap up an innings and 12 run victory over Bangladesh at the Basin Reserve, clinching their fifth straight series win, and extending their record run.

On the surface, a routine test win over an understrength Bangladesh side doesn't overwhelm, but the nature of this particular victory will be particularly pleasing for a Black Caps side that has barely put a foot wrong in tests recently.

After the first two days of the test were washed out, the Black Caps were left with the unenviable task of trying to manufacture a victory in a three-day test – something they hadn't had to do since 2001.

But, just as they did 18 years ago, New Zealand had few problems with the tricky task, requiring just 201.5 overs to wrap up yet another test series victory, and lock in second spot on the test rankings at the end of the season.

They managed to end Bangladesh's resistance without BJ Watling or Kane Williamson, with the experienced pair sitting out the final day with a hamstring strain and shoulder problem respectively, but all that was needed to set up victory was the short ball barrage of Neil Wagner.

Resuming at 80-3, two early partnerships from Bangladesh had threatened to frustrate the hosts. But, after Trent Boult removed Soumya Sarkar, Wagner ensured there would be no repeats of their wait for victory in Hamilton, snaring three scalps in the span of three overs.

One short ball saw Mohammad Mithun scoop a catch to Tim Southee at leg gully, another lured Liton Das into an inadvisable hook shot, and one more saw Taijul Islam pop up the easiest of catches to Tom Latham at silly point.

With Bangladesh's tail incapable of fight, some seriously sloppy slogging resulted. Mahmudullah ran out of partners on his way to 67, while Mustafizur Rahman had some fun before Boult (4-52) removed his middle stump for 16.

Wagner finished things off, earning his seventh test five-wicket bag, and nine wickets for the match, by bowling Ebadot Hossain. It sealed an unlikely victory - remarkably with two sessions to spare - and an unassailable 2-0 series lead.

Bangladesh have one last chance to salvage something in the third test in Christchurch, but the Black Caps will be at short odds to complete a superb series, and cap off a truly stellar season.