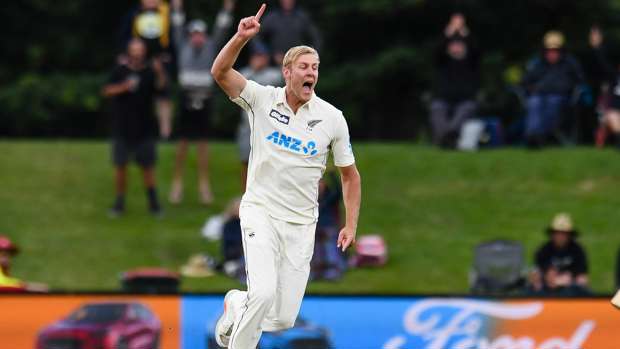 Kyle Jamieson has been turned into an instant millionaire, becoming the highest paid Kiwi in Indian Premier League history.

A man who might earn $150,000 for the Black Caps was suddenly among the highest paid Kiwi sports people ever.

The tall Black Caps fast bowler turned into an overnight T20 sensation in the money stakes, with the IPL auction held in the wee hours of Friday morning.

Only South African all-rounder Chris Morris, who scooped over $3m from Rajasthan Royals, went for even more. This created a new IPL record for an overseas player.

Jamieson is with the Black Caps in Christchurch, and claimed before the auction that he wasn't thinking too much about it.

"I'm trying not to pay too much attention to it – whatever happens, it will still be there in the morning," he said of the auction.

The 26-year-old Aucklander has never even played in India, and only made his international debut in all three forms of the game last year. But his impact was instantaneous.

The cricketing skyscraper has had an amazing start to his test career, with 36 wickets at an astonishing average under 14, and averaging 56 with the bat in six games.

He will join cricketing superstars Virat Kohli and AB de Villiers, plus Aussie Glenn Maxwell - the highest paid player in IPL history – in the Bangalore squad.