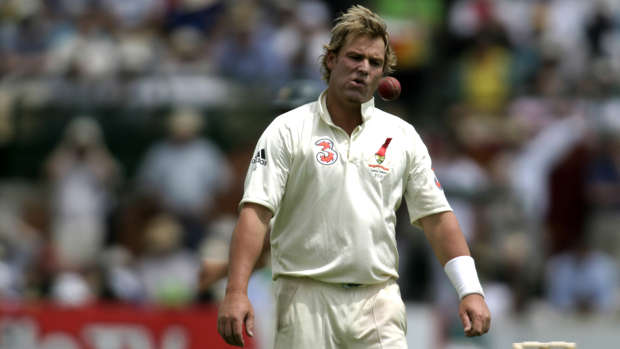 Australian cricket great Shane Warne's superb career left him plenty of moments to be proud of - but one sticks out.

Warne was on the verge of his first test century against New Zealand in Perth in 2001, facing a young Daniel Vettori and needing just one more run to bring up the maiden hundred.

But instead of playing it safe and trying to find a single, the legendary leg-spinner slog swept the ball high and into the hands of Mark Richardson - and he would never get that close again.

Finishing his career with 3,154 test runs to his name, that day left Warne with the unfortunate record of being the player with the most test runs without a century.

And the regrettable shot still haunts him to this day.

Reliving the innings in the latest Howie Games Podcast, when he featured as host Mark Howard's weekly guest, Warne admitted that he still questioned himself over that shot.

"When I see the replay of me trying to slog it for six I think 'you idiot, what were you doing?'" Warne said. "My mindset wasn't to play a big mow for six. I was just trying to sweep it along the ground for one. But when I watch the replay I take this almighty swing at it.

"The adrenaline had pumped and all that stuff. Basically I choked, I choked there, I choked at Old Trafford in '05 Ashes.

"I look back now and laugh but at the time as I was walking off the ground I was just thinking 'you idiot'. I was disappointed to not make a hundred but I was more disappointed at how I got out."

The sheer disappointment and anger could not have been worse than on that day, but as Warne revealed, team manager Steve Bernard was on hand and knew exactly how to relieve the tension.

"By the time I got to my spot and there was just deathly silence in the dressing room, Steve Bernard, the team manager, had put a chair in the shower area and an ashtray and a beer there. I just walked straight in there, I just lit up a dart, had a beer and went 'you idiot'. And everyone started laughing.

"From then I was sort of giggling most of the night. It wasn't 'oh no, what was I doing'."